Hey guys! Sorry in advance for this LONG update, but a lot went on during these past couple weeks and I felt the need to share it all because some of it has had me pretty concerned.

At week 27 baby was the size of a bunch of a bananas and about 15 inches long. By week 28 baby is the size of a coconut and is almost 16 inches long and weighs about 2.5 pounds! His wrinkles are starting to disappear as he puts on more fat, which is helping him regulate his body temperature. He is also rehearsing for life by dreaming, coughing and practicing breathing!

Holy moly – the end of week 26 and week 27 were busy ones!! My husband and I traveled to Victoria, BC, to visit his family! I was feeling pretty good, other than sitting on a plane, which didn’t help the typical un-comfortableness of pregnancy. Baby boy started doing rolls which was really cool to feel as up until now, I was only feeling little kicks.

By day 4 of our trip his movement really slowed down. We were doing a lot of walking so I figured maybe he was just moving while I was walking so I wasn’t feeling it like I usually do. When we got back to the house I tried laying down for a while to see if I could feel him and I wasn’t having any luck. From what I’ve read, if you drink a big glass of orange/apple juice or eat something sweet and then lay down again, baby should start kicking up a storm. So I did just that. I drank a big glass of orange juice and was snacking on some candy leftover from our flight, and then laid down for about an hour and STILL wasn’t feeling any movement. I started to freak out but was trying to stay calm at the same time, figuring he was just tired from all my walking, or he was growing, etc. I thought about going to the hospital many times but didn’t want to feel “crazy”. By that evening he started moving around again, which was a HUGE sigh of relief, and he’s been very active ever since, so I am no longer worried but for those of you reading, and maybe going through something similar, here is what my OB told me when I mentioned it: he said that I did the right thing by drinking a sweet drink and laying down again – but I shouldn’t have waited more than half an hour (after the sweet drink) without feeling any movement before going to get checked out right away! I obviously got lucky this time, but now I know for next time, that just waiting it out isn’t a smart decision because you can never be too careful with a tiny baby growing inside of you! So if anyone reading this is going through something similar, please stop googling and go get checked out! ❤

My back pain is getting really bad, especially since we traveled, so I have a massage booked for early next week!

Other than the back pain, I haven’t really had many symptoms that are out of the ordinary!

I got to see my OB for the first time during week 27 and it was great!! My husband and I both really liked him and I felt as though I got more information in that one 20 minute visit than I had received during all of my prenatal check ups with my family doctor. We found out that my actual due date is actually a little later than we thought (June 26th) because it is most accurately measured from the very first ultrasound.

As some close family members and friends know, I haven’t been very happy with the care I have received from my general practitioner during both my first pregnancy, and this one. I won’t get into the small details about why I was unhappy in the first place, but after seeing my OB, I have realized that one VERY important detail was overlooked and it has me pretty rattled.

While my OB was going over my paperwork, he mentioned to me that my blood type is B but my Rh is ‘Weak D’. To be honest, I am still not 100% sure what that means, but as he described it, it means that my blood type is in between B+ and B-. He asked if I had been sent for any follow up blood work and I said no.

Here is a quick explanation of Rh Incompatibility from my perspective. I am obviously not a doctor, but this is what I have gathered from what my OB mentioned during my check up an from what I’ve read in my ‘What to Expect’ book.

What Rh factor you are isn’t normally any cause for concern except during pregnancy. Everybody is either Rh+ or Rh-. with Rh negative making up only about 15% of the population. The problem occurs when an Rh- mom, has an Rh+ baby (the Rh+ gene would be inherited from the dad). Usually during a first pregnancy, it won’t create a problem because there aren’t yet any antibodies to the baby’s Rh factor present in the mom. But once a mom’s immune system kicks in and produces the antibodies (either during delivery, or during an abortion or miscarriage), the antibodies stay in her system. These antibodies could potentially cross the placenta and attack the baby’s red blood cells, causing mild to severe anemia in the baby.

To prevent the formation of the antibodies, an injection can be given to the mom at 28 weeks, and again 72 hours after delivery.

Since my previous doctor hadn’t sent me for any follow up blood work (even though I got my prenatal blood work done at 7 weeks pregnant) the OB said that we should head over to the hospital, since it’s just right across the street, for me to get my blood drawn to rule out Rh incompatibility. I got my blood drawn and was told to call the next afternoon to get my results.

Turns out, I am Rh-, and will be needing the RhoGAM injection.

Luckily, everything seems to be okay but here is why I am so rattled by the fact that my doctor didn’t mention any of this to me:

First off, I probably should have been given the injection (or my husband should have at least been tested) after having my miscarriage in the summer. Looking at my results from my prenatal blood work during this pregnancy I see that it says “No red cell antibodies detected by screening at 37 degrees C.” I haven’t had a chance to talk to my OB yet because as I write this, it is a long weekend but by reading that I am hoping that means that my body did not develop the antibodies after my miscarriage and that getting the injection now will prevent problems during this and future pregnancies.

Second, LUCKILY, I went to see my OB just in the nick of time, since the injection is supposed to be given at 28 weeks, which I will be next week. I am hopeful that everything will turn out okay but still very frustrated with the fact that my previous doctor didn’t once mention anything about this to me.

Since being in BC, I’ve really been enjoying fried egg sandwiches with cheese whiz. Haha sounds so gross but it’s soo good! I’m still LOVING my fruit.

Still no real aversions that I can think of.

Baby rolls! Literally the coolest, most amazing feeling in the world! It is such a fun sensation feeling him roll around!

I definitely missed drinking wine while in BC visiting my inlaws, but this little baby boy is SO worth it!

At the beginning of week 28, I weighed myself at 140 pounds. A total of 17 pounds up from my pre-pregnancy weight.

I am excited that we are now into April!! At the very end of week 28, we got the floor in the nursery replaced! Now we just need to put in the new baseboards, and paint the closet!!! I am getting SO excited to start decorating the room!

I ordered my husband and I new duffel bags, that I plan to use to pack our hospital things!! I will do a post on what I all pack for us to bring to the hospital soon (keep in mind, I am an overpacker AND I like to pack early.. haha).

Here are a few photos from our trip out West! 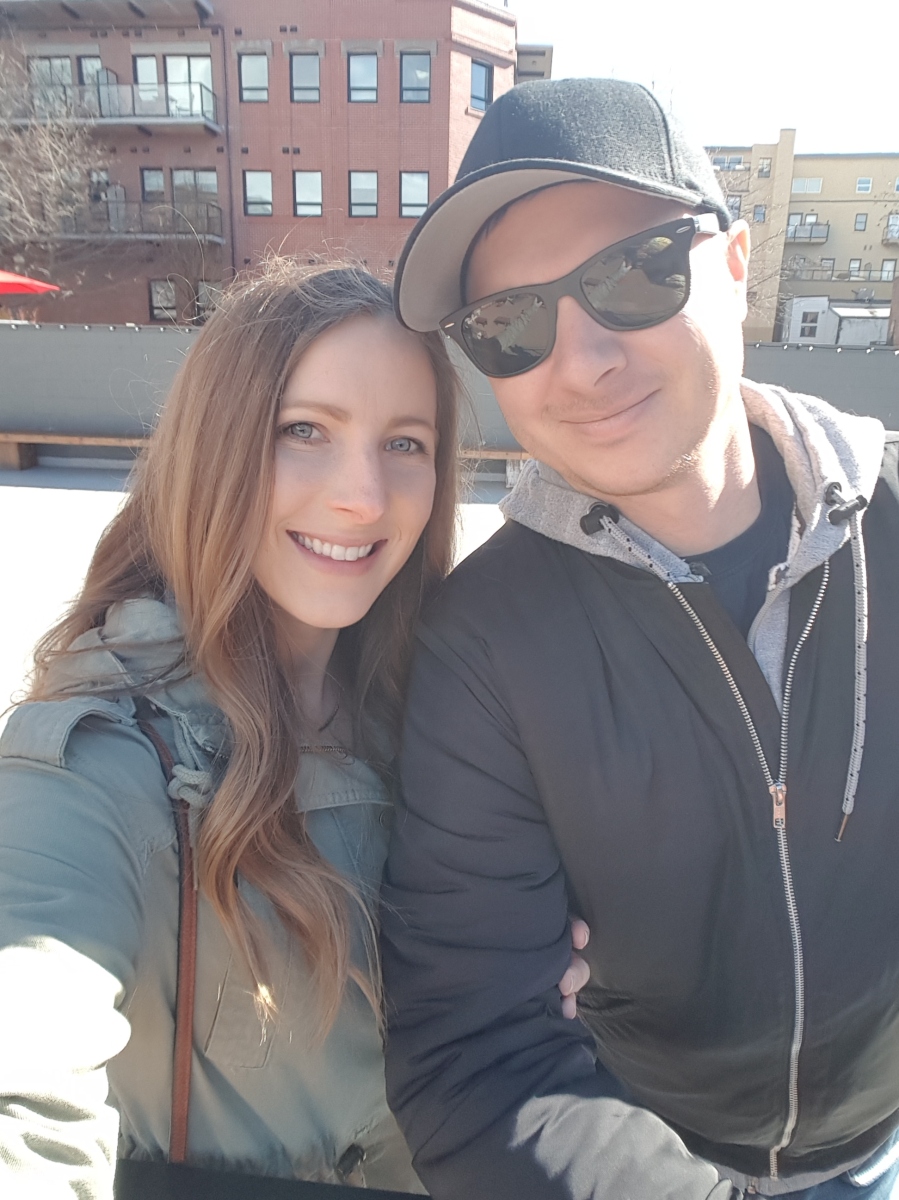 Here is my weekly comparison.. Doesn’t look like a grew much, but I feel as though I did!